I grew up in a single parent, working class household in the 1960s and 70s.   However, that didn’t stop my mother from feeding us wonderful and creative food.  My father passed when I was five and as soon as I hit first grade, my mom entered the job market as a cook in a school cafeteria aka “cafeteria lady”.   Her kids at school ate as well as the ones at home.  It never ceased to amaze me that after cooking 6 hours for 200 plus students, she still had the energy and creativity to cook for me and my sisters at home.  Clearly, this was a woman who loved being in the kitchen and it showed in the food she created.

Despite tight budgets, the one thing she never skimped on was her spices and herbs.   To this day, it amazes me when people have only a few spice jars in a rack instead of an entire shelf or draw of spices.   And if she didn’t have access to a “spice blend”, she made her own from stock on hand.

I was thinking of her when I found a good tangine recipe that needed Ras El Hanout, the ubiquitous spice blend of Moroccan cooking.    Lacking a good Middle Eastern market, I found this recipe on Epicurious and dragged out the spice jars! 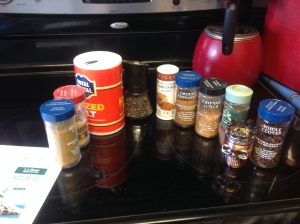 Its a simple blend of the following spices.

I only had whole cloves, so I had to drag out my spice grinder.   Its not the most efficient one, but it works and looks cool. 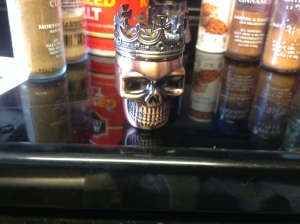 The spice blend should be stored in an airtight container for up to a month.

It tasted great in the tangine and it would make a great alternative to a traditional grilling rub.   I’m going to try it with roasted vegetables this weekend.
And now advice from my Mom’s kitchen:
A dull knife is more dangerous than a sharp one.
This is a piece of advice that was driven home (excuse the pun) when I managed to stab myself with a dull knife in my left hand one Thanksgiving trying to cut something out of a pan.   Luck was on my side and it was a minor wound, but I could have ended my bass playing by hitting a tendon.  Yes mom, I now get all my knives sharpened regularly by the nice guy that shows up weekly at the farmer’s market.